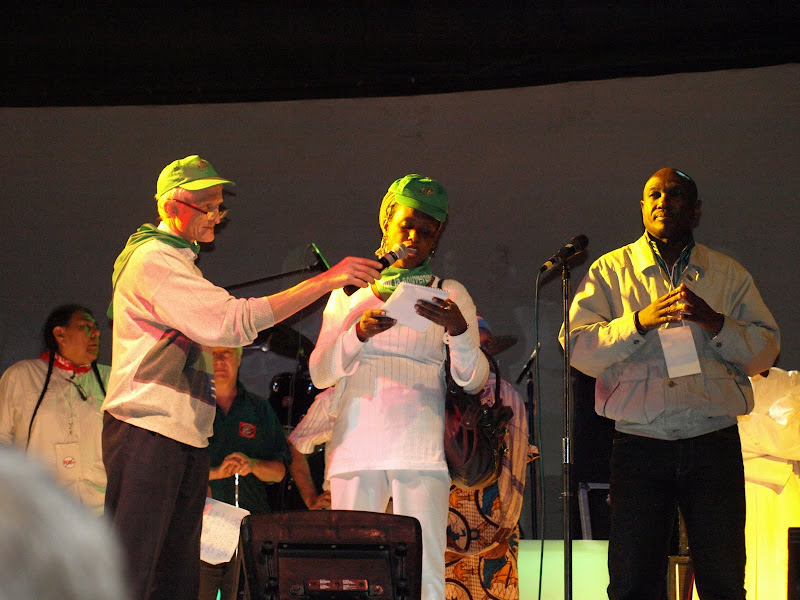 . As the Social Movements Assembly of the World Social Forum of Dakar, 2011, we are gathered here to affirm the fundamental contribution of Africa and its peoples in the construction of human civilisation. Together, the peoples of all the continents are struggling mightily to oppose the domination of capital, hidden behind illusory promises of economic progress and political stability. Complete decolonization for oppressed peoples remains for us, the social movements of the world, a challenge of the greatest importance.

We affirm our support for and our active solidarity with the people of Tunisia, Egypt and the Arab world who have risen up to demand a true democracy and build the people´s power. Their struggles are lighting the path to another world, free from oppression and exploitation.

We strongly affirm our support for the Ivory Coast, African and world peoples in their struggles for sovereign and participatory democracy. We defend the right to self-determination for all peoples.

Through the WSF process, the Social Movements Assembly is the place where we come together through our diversity, in order to forge common struggles and a collective agenda to fight against capitalism, patriarchy, racism and all forms of discrimination.

We are celebrating the tenth anniversary of the Social Forum, which was first held in Porto Alegre in 2001. Since that time, we have built a common history of work which led to some progress, particularly in Latin America, where we have been able to intervene in neoliberal alliances and to create several alternatives for just development that truly honor nature.

In these ten years, we have also witnessed the eruption of a systemic crisis that has expanded into a food crisis, an environmental crisis, and financial and economic crises, and has led to an increase in migrations and forced displacement, exploitation, debt levels and social inequities.

We denounce the part played by the main actors in the system (banks, transnational companies, the mass media, international institutions, …) who, in their constant quest for maximum profits, continue with their interventionist politics of war, military occupation, so-called humanitarian missions, new military bases, plundering natural resources, exploitation of entire peoples, and ideological manipulation. We also denounce their attempts to co-opt our movements through their funding of social sectors that serve their interests, and we reject their methods of assistance which  generate dependence.

Capitalism´s destructive force impacts every aspect of life itself, for all the peoples of the world. Yet each day we see new movements rise, struggling to reverse the ravages of colonialism and to achieve well-being and dignity for all. We declare that we, the people, will no longer bear the costs of their crisis and that, within capitalism, there is no escape from this crisis. This only reaffirms the need for us, as social movements, to come together to forge a common strategy to guide our struggles against capitalism.

We fight against transnational corporations because they support the capitalist system, privatize life, public services and common goods such as water, air, land, seeds and mineral resources. Transnational corporations promote wars through their contracts with private corporations and mercenaries ; their extractionist practices endanger life and nature, expropriating our land and developing genetically modified seeds and food, taking away the peoples’ right to food and destroying biodiversity.

We demand that all people should enjoy full soverignty in choosing their way of life. We demand the implementation of policies to protect local production, to give dignity to agricultural work and to protect the ancestral values of life. We denounce neoliberal free-trade treaties and demand freedom of movement for all the human beings.

When the G8 and G20 hold their meetings, let us mobilize across the world to tell them, No ! We are not commodities! We will not be traded !

We fight for climate justice and food sovereignty. Global climate change is a product of the capitalist system of production, distribution and consumption. Transnational corporations, international financial institutions and governments serving them do not want to reduce greenhouse gases. We denounce ¨green capitalism ¨ and refuse false solutions to the climate crisis such as biofuels, genetically modified organisms and mechanisms of the carbon market like REDD, which ensnare impoverished peoples with false promises of progress while privatizing and commodifying the forests and territories where these peoples have been living for thousands of years.

We defend the food sovereignty and the agreement reached during the Peoples’ Summit against Climate Change, held in Cochabamba, where true alternatives to face the climate crisis were built with the social movements and organisations from worldwide.

Let’s mobilize, all of us, especially on the African continent, during the COP 17 in Durban in South Africa and in « Rio +20 » in 2012, to reassert the peoples’ and nature’s rights and block the illegitimate Cancun Agreement.

We support sustainable peasant agriculture ; it is the true solution to the food and climate crises and  includes access to land for all who work on it. Because of this, we call for a mass mobilisation to stop the landgrab and support local peasants struggles.

We fight against violence against women, often conducted in militarily occupied territories, but also violence affecting women who are criminalized for taking part in social struggles. We fight against domestic and sexual violence perpetrated on  women because they are considered objects or goods, because the sovereignty of their bodies and minds is not acknowledged. We fight against the trade in women, girls and boys. We call on everyone to mobilize together, everywhere in the world, against violence against women. We defend sexual diversity, the right to gender self-determination and we oppose all homophobia and sexist violence.

We fight for peace and against war, colonialism, occupations and the militarization of our lands.

The imperialist powers use military bases to trigger conflicts, control and plunder natural resources, and support anti-democratic initiatives, as they did with the coup in Honduras and the military occupation of Haiti. They promote wars and conflicts as in Afghanistan, Iraq, the Democratic Republic of the Congo and many others.

We must intensify the fight against repression and the criminalisation of the people’s struggles and strengthen the solidarity and initiatives between peoples, such as the Global Boycott Disinvestment and Sanctions Movement against Israel. Our struggle also aims at NATO and to ban all nuclear weapons.

Each of these struggles implies a battle of ideas in which we cannot progress without democraticizing communication. We affirm that it is possible to build another kind of globalization, made from and by the people, and with the essential participation of the youth, the women, the peasants and indigenous peoples.

The Assembly of the Social Movements calls the forces and popular actors from all countries to develop two major mobilisations, coordinated on the international level, to participate in the emancipation and selfdetermination of the people and strengthen the struggle against capitalism.

Inspired by the struggles of the peoples of Tunisia and Egypt, we call for March 20th to be made a day of international solidarity with the uprisings of the Arab and African people, whose every advance supports the struggles of all peoples: the resistance of the Palestinian and Saharian peoples ; European, Asian and African mobilisations against debt and structural adjusment plans ; and all the processes of change underway in Latin America.

We also call for a Global Day of Action Against Capitalism on October 12th, when we express in myriad ways our rejection of a system that is destroying everything in its path.

Social movements of the world, let us advance towards a global unity to shatter the capitalist system !